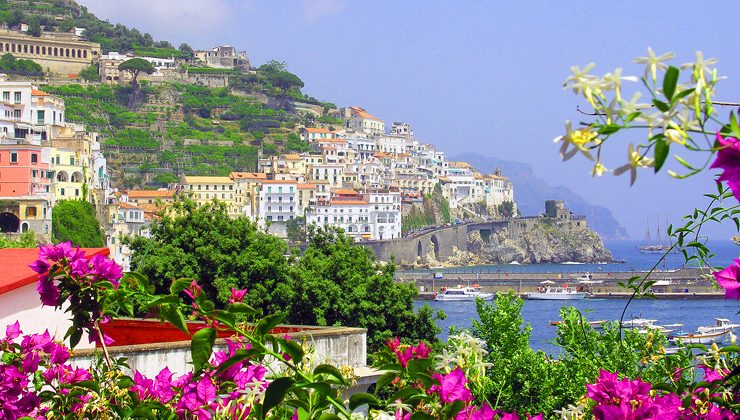 For centuries Amalfi has lured travelers hungry for sunlight and fresh sea air. Bathed in perennial summer, this corner of paradise combines the beauty of the sparkling Mediterranean Sea with a light that varies hour by hour, from dawn to twilight – an unequaled spot to enjoy a romantic getaway or a cultural feast among the region’s hospitable and charming inhabitants. But Amalfi history has been a long and tumultuous road from obscurity to fame and back – and forth – again.

Out of the Mists of Myth

History and legend intertwine here, creating a palpably mythical reality.  According to tradition, Hercules, the Greek warrior god, loved a nymph named Amalfi who, alas, died young.  Grieving the passing of his beloved and seeking the most beautiful place on earth in which to bury her, he chose the present day Amalfi, naming the spot after her. 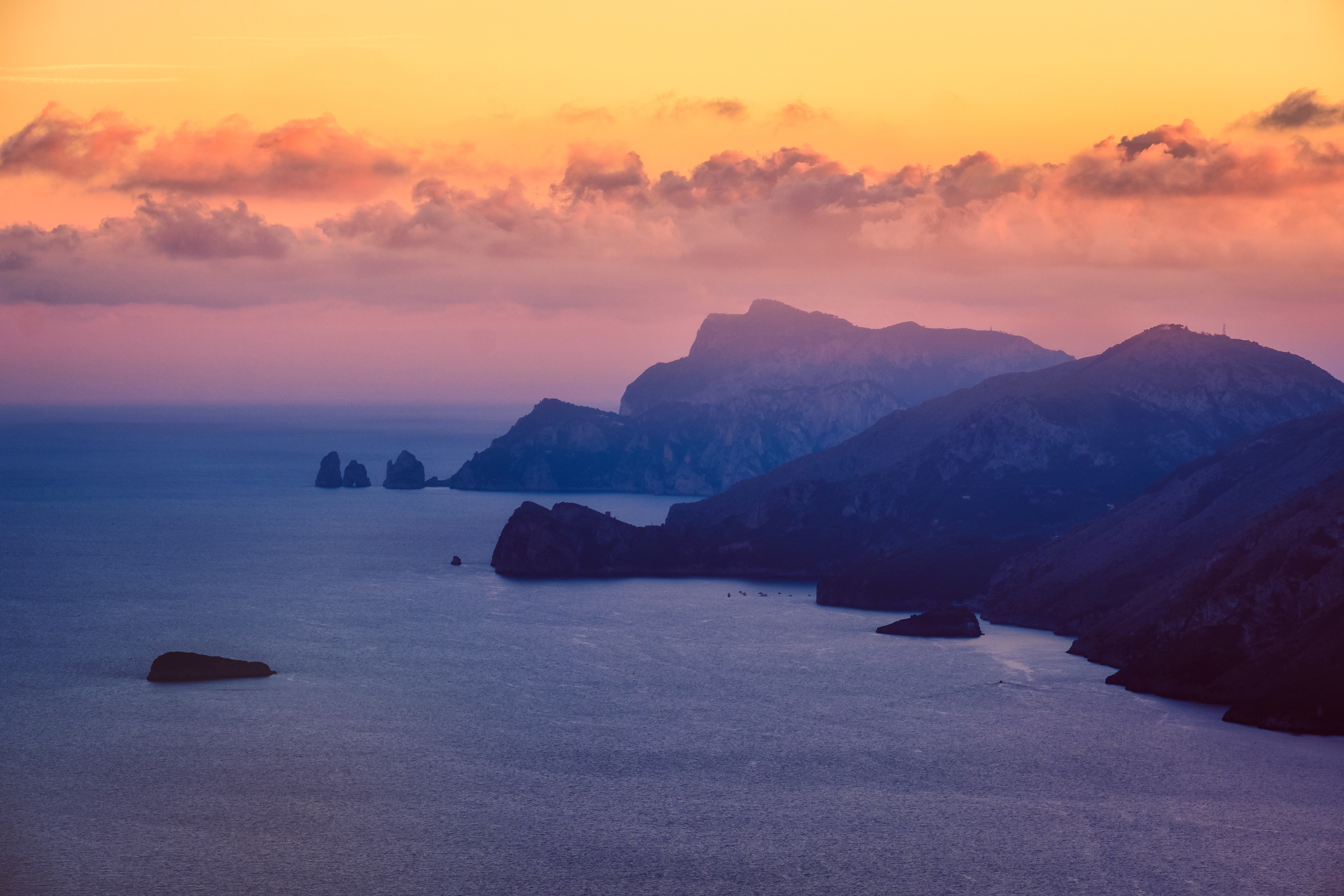 Historically speaking, Amalfi appears to have been founded by a Roman family bound for Constantinople.  When their ship ran aground on a nearby shore, they settled the area, naming it Melphes, which today is a town called Melfi.  A few years later, they moved further north, to the present day site of Amalfi, and established a new town, which they called A Melphes – hence, Amalfi.

The first documentation of the town comes from 533 AD, during the Gothic invasions, when the town passed under the dominion of the Byzantine emperor, who granted the governance of the area to the duke of Naples.  During the next century, it became a bishopric, which brought considerable wealth to the town.  This in turn allowed Amalfi to eventually build up its own defenses and become a city-state in its own right, with a powerful aristocracy who eventually stripped the bishop of his political powers.

Rise to Power of the Amalfi Empire

In 836, the duke of Benevento sacked the town, emptied its coffers and deported the local aristocrats to Salerno.  But a few years later, upon his death, the Amalfitani rebelled and, regaining their town, managed to reinstate their power and autonomy for a period that lasted until the end of the 11th century.  During this time, the astute Amalfitani played a careful game of realpolitik, safeguarding their ever-growing commercial interests against those of the Pope, the Holy Roman Emperor, the Emperor of Constantinople, and the numerous other Italian states likewise vying for power – as well as a rabble of Saracen pirates that constantly threatened their ships and the town itself.  Indeed, at least once during this period of Amalfi history, the rulers of the town found it expedient to ally themselves with the Saracens against the eastern emperor, who was forever trying to recapture sovereignty over the area.  It was a shaky and short-lived alliance, however, which ended after a furious battle in 915, which once and for all banished the Saracens from the Amalfitani territory.

For the next two centuries, the town grew in power and prestige, rivaling that of the other great maritime powers of Pisa, Geneva and Venice.  The wealth of Amalfi was such that one medieval writer claimed it to be the richest in gold, silver and fabrics of every sort, boasting a melange of cultures including Arabs, Sicilians, Africans and even Indians.  Amalfi became especially famous for having created one of the first codifications of maritime law, the Amalfitani Tables, accredited by all the maritime nations of the epoch.  These laws regulated the relations between shipmaster and shipmate, and between sailors and merchants.  Not long after, an Amalfitani by the name of Flavio Gioia invented and perfected the compass.  Amalfi also started coining its own gold coins which, resembling those of the Arabs, demonstrated its closeness to the mid-eastern cultures.  It was used throughout the Greek empire, Africa and the Lombard kingdoms.

Downfall and Decadence: or the End of Amalfi History (So Far)

In 1135, Amalfi suffered a horrendous sacking by Pisan mercenaries who had been hired by the city to defend against Norman incursions.  The city never recovered from this defeat.  Two centuries later, an enormous earthquake shattered the area, destroying most of the habitations and submersing the fortifications and maritime docks.  A few years later, the plague arrived, completing the destruction.  Amalfi, once boasting sumptuous palaces ornate with frescoes, marble columns and fountains, with an enormous wealth acquired from all over the world, now became a modest little town eking a living from a traditional economy of fishing, local crafts and agriculture.

But that’s no Lemonade… 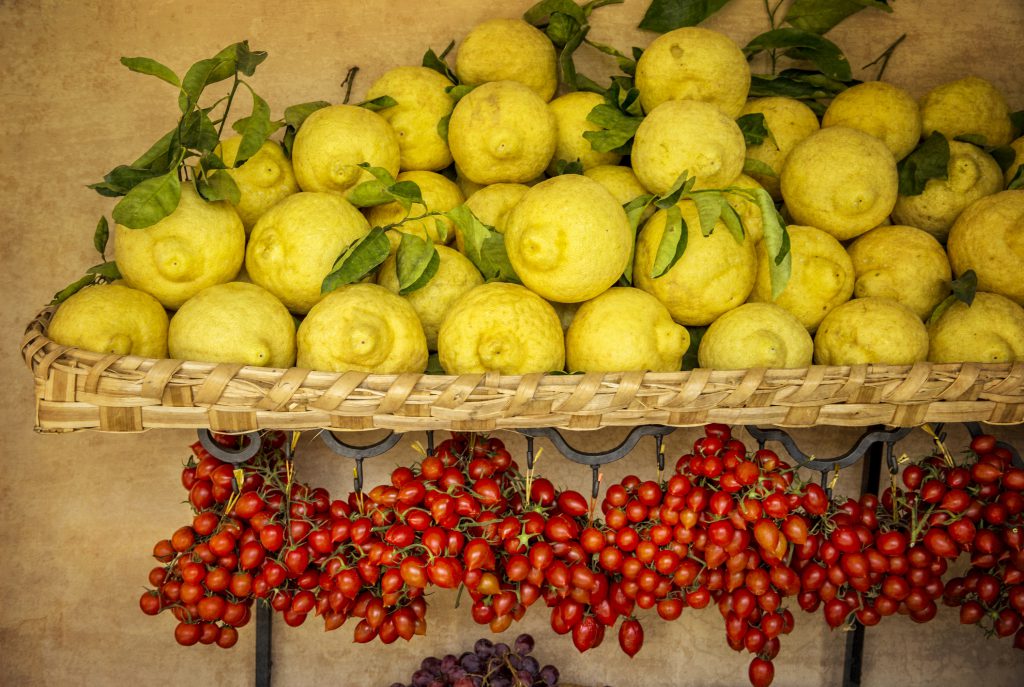 One of the most remarkable sights is the terraced gardens above Amalfi filled with lemon trees.  Due to a combination of good soil, fresh sea air and ample sunlight, the Amalfitani lemons are so sweet they can be eaten by the slice, with or without sugar – which explains the local name for the fruit: “pane”, or bread.  These lemons have long been famed throughout Italy.  During the Renaissance, after an angry Pope took away the local bishopric, the wily Amalfitani enticed him with a gift of lemons into reinstating the valued seat.

Today, aside from flavoring the delicious local pastries, creams and cakes, the lemons are mainly used in the fabrication of the legendary “Limoncello”, the bright yellow liquor with a stupendous perfume of fresh lemons.  You can visit the “distilleries” (actually, the liquor is made by steeping the rinds in a mixture of sugar and vodka) in the main square of Amalfi, where they’ll let you sample the wares – though you’ll have to settle for tasting out of a plastic cup.  Far better is to enjoy the home production of a newfound Amalfitani friend who, after a scrumptious dinner of fresh local fish, will invariably pull out a bottle of “a little something” and serve it up in a frozen glass.  Looking out over the sparkling blue sea with a burst of sweet lemon sparkling on your tongue, you’re bound to have one of those “Ah! So THIS is what it’s all about” kind of moments… 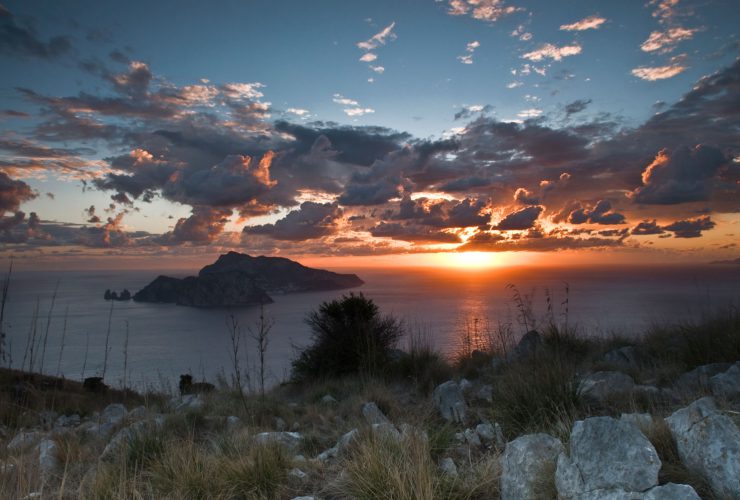 Legends of the Amalfi Coast

The Amalfi Coast sits on a peninsula sticking out into the Tyrrhenian Sea like a tongue mocking the rest of the world. Few places on earth are as magical as this region. Quaint hotels hanging on high cliffs dipping into the cobalt blue water. […] 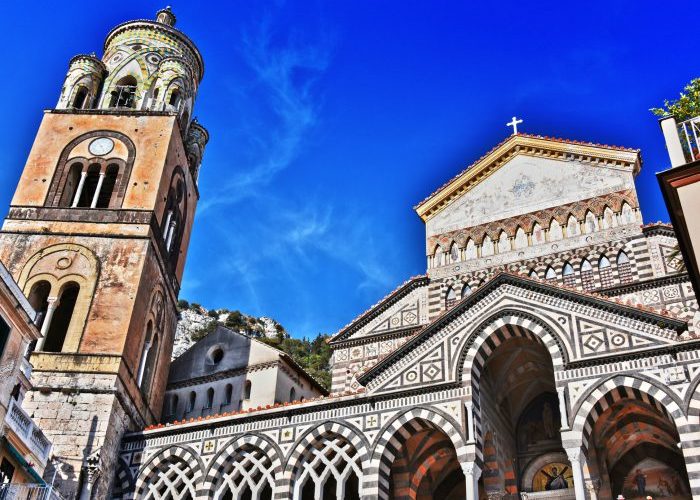 The Unique and Majestic Duomo of Amalfi

On the second day of our self-guided walking holiday on the Amalfi Coast, you descend on foot from the heights of Ravello into the town of Amalfi and soon find yourself in the central piazza, dominated by the world-renowned Cathedral of Saint Andrea, otherwise […]