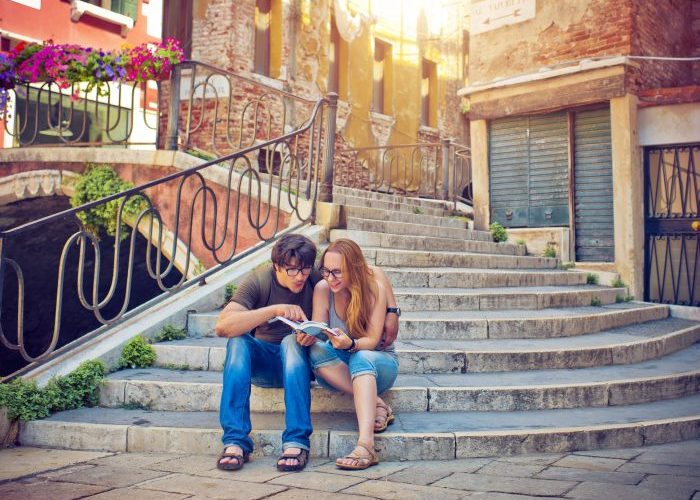 Suggested Readings for Your Trip to Italy

The cream of the crop by a long long haul (unless you don’t like your guide books accurate, complete, well-written and British). Around since 1918, every few years they update their line.

These guides (and the Fodor’s) are about not so bad either. A good range of recommendations, combined with an honest attempt to take you rather off the beaten track. Put out by those adventurous Brits.

These particular Fodor guides (characterized by a cover that’s got a gold bar across the top) are better than the other Fodor offerings. Chock full of good information, well-organized — though if you would like to have some pretty pictures, best look elsewehere. Good area maps; lacking are the town maps you find in the Rough Guides.

A solid series of guidebooks — get the ones that deal specifically with the region or city you’re interested in. The hotel and food recommendations are pretty extensive, though suited primarily to the budget-minded traveler. Great little maps of a whole slew of towns. Well-organized and properly-sized for a quick draw from a hip pocket.

Nicely put together with lots of nice pictures and good suggestions for places to go — though they’re organized a little too loosely for use as a quick reference. Better as a friendly traveling companion.

The subtitle of this series is “True Stories of Life on the Road” — entertaining, thoughtful essays by a range of writers on different regions of Italy.

Lots of maps, drawings and photographs of fauna and flora make this introduction to the wilder areas of Italy a useful guide.

An entertaining travelogue that looks into the envirionmental/cultural history of the Italians. Heaps of interesting botanical lore, as well.

Western Society and the Church in the Middle Age — R. W. Southern

While more correctly a work of European history, this superb book provides a rich backdrop to Italian culture and history from the 8th to the 16th century.

A good overview of the renaissance, its politics and culture — with nice sketches of some of the formative figures of the age.

The Civilisation of the Renaissance in Italy — Jacob Burckhardt

A classic of 19th-century historical writing, and highly influential on later historical thought. Though Burckhardt’s basic outlook feels dated, his historical sketches and stories of the age are quite entertaining.

The House of Medici: Its Rise and Fall — Christopher Hibbert

A fascinating account of the famous Florentine family, whose banking and merchant activities brought them to the forefront of the Italian renaissance.

Barzini takes a wryly funny look at his compatriots — perhaps focusing more on their weaknesses than their strengths. Highly recommended.

The story of contemporary Italy and how the Italians are changing to meet modern times.

Thoughtful essays, written around the turn of the century, that explore Italy’s art, religion and political/cultural revolutions of the time.

Within Tuscany: Reflections on a Time and Place — Matthew Spender

Sculptor Matthew Spender moved to Tuscany thirty years ago — when it was virtually unknown to the rest of the world. He has some interesting stories to tell of times not long past.

Hills of Tuscany: A New Life in an Old Land — Ferenc Mate

An often eloquent personal account of life after moving to Tuscany.

Under the Tuscan Sun — Frances Mayes

“This Old House” set in the rolling hills and olive groves of Tuscany, with pretty descriptions of what life looks like to an outsider living in an insider’s culture. Then came a book called something like Pretty Toscana, and then a movie and then a coffee table book with coffee table mug…. You get the idea.

The Food of Italy — Waverley Root

An exploration of Italian cuisine in relation to local customs, history and geography.

A wonderful blend of excellent colour photography of Italy’s countryside, its people and the food, plus authentic local recipes.

Eating in Italy: A Traveller’s Guide to the Gastronomic Pleasures in Northern Italy — Faith H. Willinger

A wonderful introduction to the best in regional cuisine and wines north of Rome, plus an insider’s list of recommended local restaurants and markets.

The Food Lover’s Companion to Tuscany

This book can be quite helpful in finding the more interesting restaurants and food-related stores in Tuscany — though somehow it seems to miss the most interesting.

Originally aired as a 4-part 6 hour film on the national Italian TV station, The Best of Youth (as it’s known in English) deals with the suspicious circumstances surrounding the death of Pier Paolo Pasolini. An instant “cult classic”, it’s available on DVD.

The Academy Award-winning film adaptation of Michael Ondaatje’s novel. Many of the Tuscan scenes were shot in and around Pienza.

A dazzling and magical reminiscence of childhood, this immensely popular film made by the Taviani brothers won the Special Jury Prize at Cannes.

An earlier film from the Taviani brothers — winner of the Cannes Film Festival Golden Palm.

Cartographically speaking, absolutely the best maps are the green-covered beauties put out by Touring Club Italiano. You can get one for the specific region you’re going to, though they are huge and you’ll find yourself folding them into various new configurations in order to fit them in your car — or hotel room. Another problem: the older ones come without indexes — a major fault unless you don’t mind searching, and searching . . . . On a drive, however, this shouldn’t cause difficulties, and you’ll be well served, especially if you want to get off the main highway and do a little jaunt through the country.

For more detailed local maps, you might want to wait until you get to Italy to look through bookstore selections. You’ll sometimes find small-scale maps that can be somewhat helpful in planning out a day hike – though beware they are often based on pre WWII maps. Also, the tourist office in each town can usually provide a map of the town, usually for free or a nominal charge.