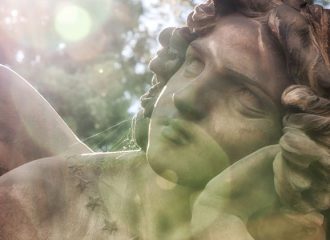 Italian funerals: there’s always one happening, they are very public events with an open invitation to attend, and sometimes, even if you didn’t plan to go, you end up going – as you’ll see from my story . . .

There is a country church not far from where I live that I had been wanting to see the inside of, thinking it might be interesting to add to one of our GIROSOLE walking tours. I had been disappointed, however, to find that it was only open on Sunday morning for one mass. My record of church attendance being rather riddled with holes, I hadn’t yet made it to that particular mass.

But one afternoon, my wife and I decided to explore a nearby walking trail. We happened to drive by the church and there, lo and behold, we saw a few dozen cars parked all around it. Figuring this was a good chance to see the inside, I turned into the little country lane that leads up to it. As we approached, we saw a hearse parked out front.

Apparently, this was no normal mass.

Being intrepid adventurers (intruders?), we went ahead and parked. Actually, we didn’t have much choice by then. Turning around in the lane was impossible – and embarrassing besides, what with the half dozen onlookers milling around the hearse. We decided we had better just look normal – as if we belonged there – so we parked and went inside the church.

The church was packed wth mourners. Apparently, we were the last ones to arrive – though as my wife later quipped, “Better late than never”. We soon learned that the dearly departed in this case was a man named Cesare, apparently a very popular fellow judging by how packed the church was. Either that, or he had had lots of prolific relatives.

We were glad, however, to have gotten inside. The interior of the church was an astonishing mixture of baroque and folk art – very colorful, though with a thick patina of dust and age. The fresco over the sacristy was half intact, and what remained looked quite beautiful from where we stood in the back. (We weren’t so brazen as to muscle our way to the front, where poor Cesare lay in his open casket surrounded by flowers). The mass had only a few more “amens” to go. With a few sprinkles of holy water and some swings of the smoking censer, it was over and we all filed back out of the church.

There, of course, we were again caught up in the “swing” of things, propriety requiring us to stand with the mourners until the coffin was carried out of the church and placed into the hearse. We couldn’t, after all, just jump back into our car, rev up the engine, and press our way through the crowd past the hearse with our eyes fixed ahead of us, could we? So we waited. In due course, Cesare was carried out, his flowers and family following close behind. We waited as the flowers were placed upon the coffin, as well as the hearse, and as the hearse moved off down the lane and everybody began getting into their cars to follow the hearse to the cemetery.

We got into our car, hoping for a little magic invisibility. Surely the procession would soon vanished, after which we could proceed on our merry way. But it quickly became clear that the manner in which I had parked on the narrow lane leading up to the church had blocked a number of cars behind us. We had no choice, therefore, than to gently ease ourselves into that long line of cars following Cesare’s final ride.

At this point, we became fully qualified participants in the funeral of Cesare, a man of whom we knew nothing. We drove slowly along in the procession, most likely the only ones blushing instead of tearing up on this solemn occasion. Surely, we thought, by the end of the little country lane that had led us to the church (and into our embarrassment), we could make a quick escape by turning in the opposite direction of the procession, free to continue with our initial plan of having a quiet walk through the placid countryside.

But no. As we neared the end of the lane, we realized that the procession – a few hundred meters long – was not going to the cemetery of the town nearby but towards a village in the opposite direction – a village whose cemetery, set out in the countryside as is often the case with these little village cemeteries, happened to be located right next to the beginning of the trail we had wanted to explore. We had looked at the trail briefly before, and on that day, there was no funeral. Today, there was, and suddenly we were in it.

So, we couldn’t escape the procession – not if we wanted our day to be productive. Consequently, we followed it all the way to the village, where the hearse stopped in the middle of the piazza and people began parking and getting out of their cars, readying themselves to walk behind the hearse for the half kilometer to the cemetery, where by a crazy coincidence, we had wanted to begin our walk. By the time we got to the piazza (being, ourselves, somewhere near the end of the long line of cars), a nice crowd had already gathered, waiting for the rest of us to join.

For about thirty seconds, my wife and I both had the same panic: carefully watched by a few hundred pairs of eyes, we were going to be required to park our car, walk over to the hearse, our heads properly bowed, faces properly solemn, top properly join Cesare on his last jaunt through the countryside.

All we had wanted was to take our own little walk. Well, we were, after all, going to get a walk, though not of our own choosing.

And once behind the hearse, were we not also going to be required to follow it into the cemetery? Would we not also find ourselves, willy-nilly, beside Cesare’s grave, awaiting his final decent, listening to the final words, filing past the grave and casting our own handful of earth, then joining the rest of the crowd as they returned to their cars in the little piazza?

Sure, we were going to get a walk, but what had happened to OUR walk? Had Cesare, in some way perhaps too frightening to think of, pre-empted our plans from beyond the grave (or, more strictly speaking, from before the grave, since he hadn’t yet made it there)? Was he requiring from us a little due respect? Would he not leave us in peace until we had paid him his last rights, so to speak?

Ah, this was a long thirty seconds, indeed. But it was a crucial thirty seconds, that proved too long for even the (now timeless) grasp of Cesare to control. We were, of course, the entire time looking for a way out, and by the end of those crucial seconds, I had discovered what I thought might be IT.

Fortunately, Cesare had brought his hearse to a stop a little way past a small side alley that emptied into the little road to the cemetery. Recognizing the opportunity, I made a quick turn, veering into this alley, and we were off on our way, seen only by a few elderly women in black and a tall man, wearing a tall black top hat, whom we took to be the undertaker.

The rest of the afternoon proceeded much more closely according to plan. We parked a little way past the cemetery and made it to our trail before Cesare arrrived. We had a wonderful walk – the countryside really being quite fantastic in these parts, especially in May, what with the views of the Apennines still capped in places with snow and the fields green with the young grass and deep red with poppies. And by the time we finished and drove back past the cemetery, the funeral was long over.

It seems Cesare had tired of dissuading us of our mundane desires and made no more demands on our time.

Now that I think of it, I did get rather caught up in the telling of this tale. It has taken up a good bit of my time to tell, and it’s destined to fill its own little plot of cyberspace.

So, Cesare got his own, I guess, after all.