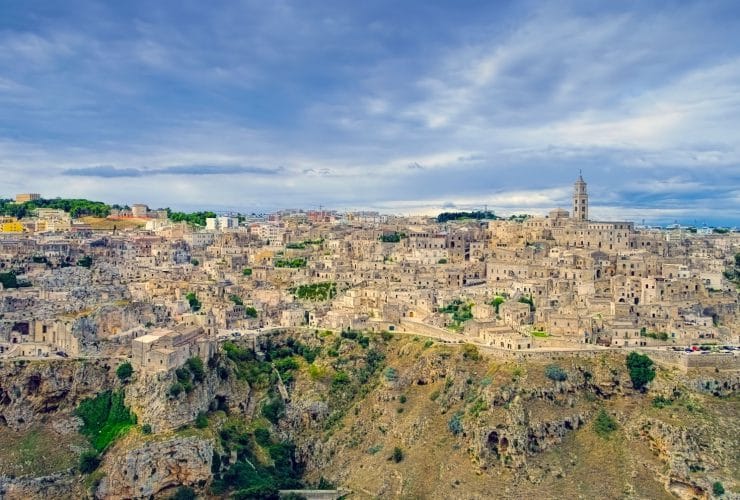 Walk Among the Sassi: Where to Go, Stay and Eat in Matera

Italy has fabulous hiking trails, from the volcanos of Sicily to the Alps of Alto Adige. But no place else in Italy can you take a walking tour of the third-oldest city in the world. Matera, located in the heart of the lightly trodden region of Basilicata, is 9,000 years old. Think about it. It has been continually inhabited since 7,000 years before Christ.

Matera is built on the side of a gorge with yellowish-white stone structures piled on top of each other like a creative child with building blocks. Only one road snakes through this area, known as the Sassi (lit. “the Stones”). Narrow staircases connect small houses with little piazzas and churches, ranging from convents to cathedrals. And Matera has 180 churches for 60,000 residents.

History of the Sassi

Until as recently as 40 years ago, the Sassi was a condemned hellhole. After World War II, residents lived up to 12 in a cave dug into the tufa (in English, tuff, a light, porous rock formed by consolidation of volcanic ash). They had no running water or electricity. A pot under the bed was the toilet. They shared their rooms with their goats and chickens, and disease was rampant.

The government condemned the Sassi in the 1950s but in the early ‘80s allowed people to return if they refurbished the homes with their own money. Today, the Sassi not only attracts a good share of tourists each year (mostly Italian) but 25 movie crews have made films here, including “The Passion of the Christ” in 2003.

Walking the Sassi of Matera — Day One

Italians love their passaggiate (lit. “strolls”). For your own passeggiata of the Sassi, you’ll need two days. It’s bigger than you think. Many bed & breakfasts and small hotels dot Matera and all have decent maps of the Sassi’s windy, narrow, zigzagging streets. So don’t leave home without one! 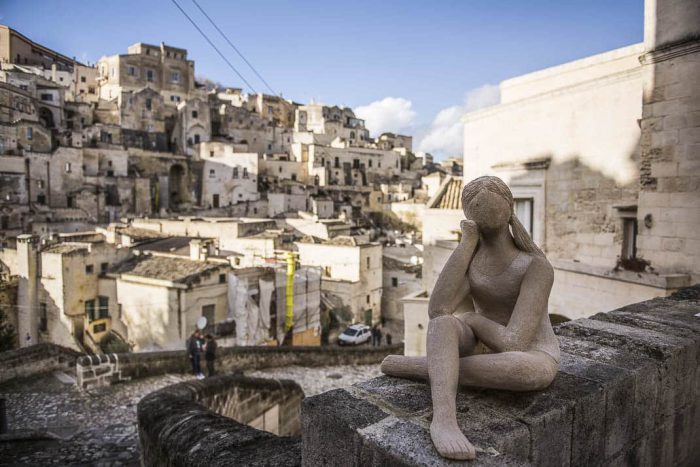 The Sassi is separated into two areas: Sasso Caveoso on the south end and the more polished Sasso Barisano on the north. Start your walk in Sasso Caveoso and work your way north. A good place to begin is in front of La Dolce Vita B&B, which is just off the main drag of Via Bruno Buozzi. Next to the B&B is a small pathway where Jim Caviezel, who played Jesus in “The Passion of the Christ,” fell with a giant cross on his back.

Continue past that point to a platform with a grand panoramic view of the gorge. Called the Gravina Gorge after the narrow river that meanders through it, the gorge stretches for miles east of town. It’s long and craggy. Grasses fight for space on the rock faces. Caves, looking like holes poked out by giant needles, pockmark the side of the gorge.

Down the staircase you’ll come across the Chiesa di Santa Lucia (entrance fee is €6, which includes the entrance to 2 other churches as well). Santa  Lucia was built in the 8th century as a Benedictine convent and features 12th century frescoes, including a rare portrait of a breast-feeding Madonna.

Squeeze your way past a steady line of Italian tourists and work your way down to Via Buozzi. It leads to the 13th century San Pietro Caveoso, Matera’s only church that is not built into tufa walls. The grounds of the church provide spectacular views of the gorge beyond. Inside you’ll hear beautiful music. When we were there, it was of a male chorus that reverberated against the walls as if alive.

Coming out you’ll find Piazza San Pietro where you can look down into the gorge and hear the river rapids below. Above the river, narrow hiking trails crisscross up the canyon, offering fantastic views of the town. However, transport to the other side is costly. People hawk shuttle services in the piazza and they average about €30  person, which includes a Matera tour.

You can hike the gorge on foot in about two hours. The 200-foot gorge is part of the Parco della Murgia Materana and is covered with abandoned caves and ghost villages. You’ll also come across 150 abandoned cave churches called chiese rupestri (lit. “rock churches”). Go to the parking area near the Convento Santa Lucia on the eastern edge of Sasso Caveoso and head down. At the bottom, cross the river and then go up the Taranto-Laterza road to the belvedere (“viewpoint”) on the other side. 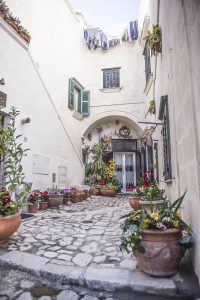 Stepping away from the crowds that lead to the convent, you can leave the road and begin climbing through the residential area. The staircases that crisscross the Sassi like a Chutes and Ladders game board lead to private homes that are much more decorative than they look from afar: tiled courtyards surrounded by potted plants, statues of maidens and pretty window frames. It looks like a cozy place to live — especially now that they all feature running water and electricity.

After a lunch break at Vicolo Cieco, a hip, little wine bar that serves a mean panino with Basilicata’s famed thick soft bread, go back upstairs leading to Matera’s iconic symbol: the 13th century cathedral in Piazza Duomo standing atop the Sassi like a Christmas ornament. Its 50 m (160 ft) tall tower can be seen from all over the Sassi. What can’t be seen from outside is the confection of white and gold baroque architecture dripping off the inside walls and ceiling.

Tired of churches? Wander down Via Ridola, a narrow pedestrian street lined with locals selling goods from honey to lavender to Basilicata cheeses. Then call it a day and dine at Caveoso, on Via Buozzi 21. It’s built in a cave with the classic curved stone roof and mottled walls. Order the local orecchiette materana, ear-shaped pasta with sausage, mushrooms and tomatoes. As the Italians say, “gnam-gnam” (“yummy”)!

The next morning go north along where Via Burrzo changes its name to Madonna delle Virtu in the neighborhood of Sasso Bansano. Walking into the interior of the Sassi, head toward San Pietro Barisano, the second of the three churches included in the ticket you bought yesterday at Santa Lucia. Unfortunately, the 13th century church was plundered in the 1960s and ‘70s and the empty altar and headless statues show the destruction. But the highlight is below the floor. It’s a maze of narrow passageways lined with 4-foot-high niches where they placed corpses during drainage in the 13th century. It’s not for the claustrophobic. 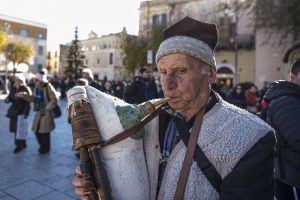 A little farther down the road, the third church included in your ticket, San Giovanni Battista, is beautiful in its simplicity: a gray and white stone framework with one stained-glass window over the altar. It’s not far from Piazza Via Veneto where the locals gather, especially on weekend evenings. Families walk along the well-lit piazza. Old men play on zampogne, a traditional instrument in Southern Italy. Music drifts from various venues.

If you’re there on a Sunday, finish the evening with mass at San Giovanni and dinner at Soul Kitchen, Via Casalnuovo 27, maybe Matera’s most elegant restaurant. The potato ravioli filled with mozzarella di bufala and covered in pesto and tomato sauce is the perfect way to end a weekend. Raise a glass of local Aglianico wine and toast to the Materani, a people who have survived 9,000 years with many more good years to come. 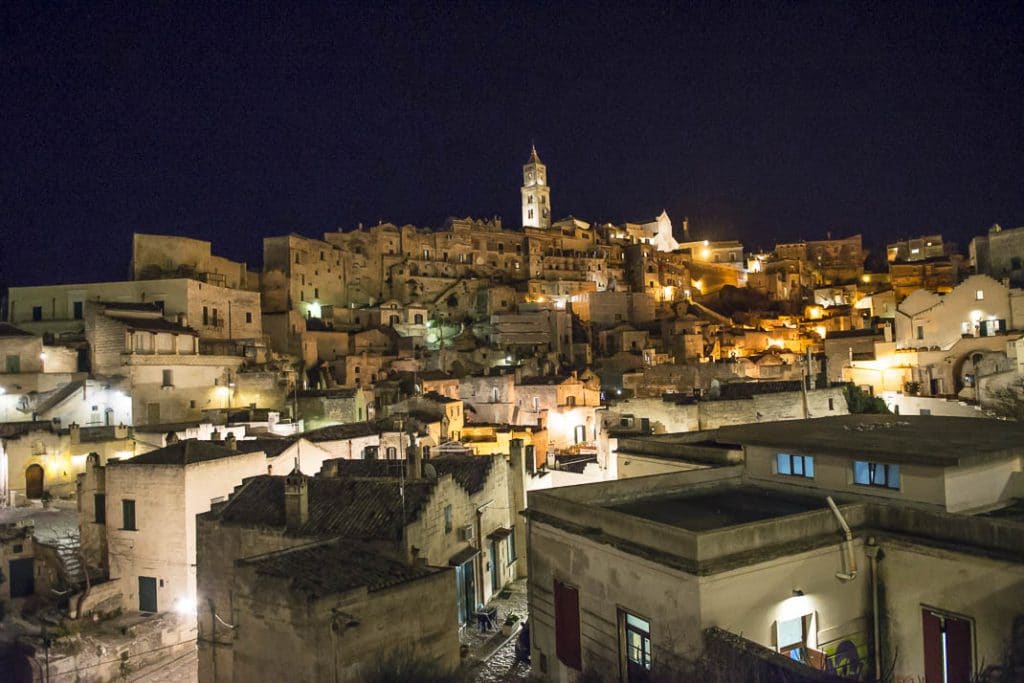 Discover the "City of Caves" and the Trulli of Puglia

Explore the first colonies of the ancient Greeks