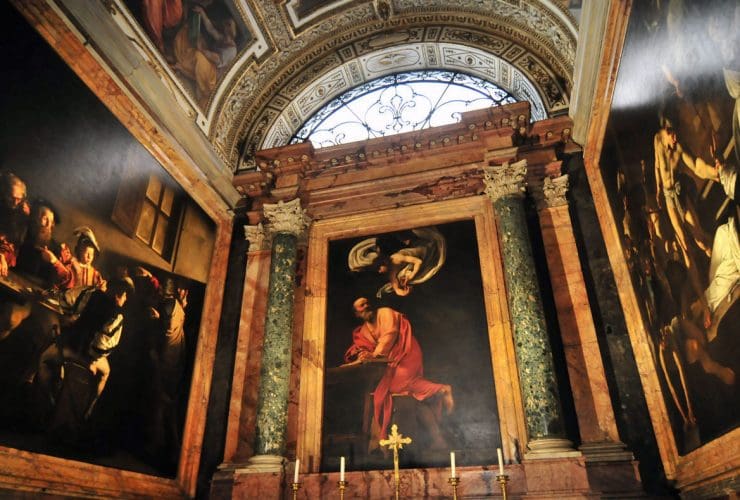 A Walking Tour of Caravaggio’s Rome

He was a rebel at a time when the public bowed at the knee of the Catholic Church. He was a carouser, a brawler and, indeed, a murderer. But Michelangelo Merisi da Caravaggio was also a genius, a master of shadow and light. And he revolutionized painting after the height of its heyday: the Renaissance.

He didn’t receive his true fame until after his mysterious death in 1610 at age 38. Since then the man known today simply as Caravaggio is Italy’s most famous Baroque painter.

He is all over Rome. A walking tour of Caravaggio’s work can also serve as a walking tour of the Eternal City. It takes you all around Centro Storico to tony Via del Corso to Piazza del Popolo to the Vatican. It even leads to the trendy, once-bohemian neighborhood of Trastevere.

Rome has nine sites featuring about two dozen of Caravaggio’s works. It’s best to break it down into two days. You never want to rush Caravaggio.

Inside you’ll find Caravaggio’s The Fortune Teller (1594) and St. John the Baptist: Youth with a Ram (1602). Note the gypsy fortune teller removing the ring from the unsuspecting youth’s hand. Caravaggio did eight paintings depicting John the Baptist. In this one, the ram represents lust, an irony not lost on Caravaggio fans. 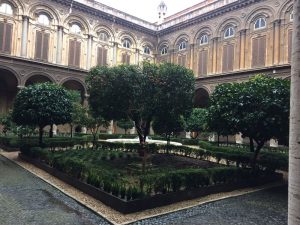 Galleria Doria Pamphilj, Via del Corso 305, daily 9 a.m.-7 p.m., 12 euros. When exiting the museum, be sure to walk to walk around the palace on the left-hand side of the piazza. If you continue down a short path, you’ll get a terrific view of the Roman Forum below. Then walk back down the stairs and cross the massive Piazza Venezia. Be sure to see the balcony on the 15th century Palazzo Venezia on the left side of the piazza. It’s here where Mussolini rallied his countrymen who filled the piazza to hear his acid-laced discourses.

Walk down Via del Corso where you’ll find Zara, Ralph Lauren and Elisabetta Franchi. Eventually you come to Palazzo Doria Pamphilj on the left-hand side. The Galleria Doria Pamphilj is off the courtyard filled with orange trees and a bubbling fountain.

Inside the gallery is Caravaggio’s Mary Magdalene (1595), Rest on the Flight into Egypt (1597) and Young St. John the Baptist (1602). His portrayal of Mary Magdalene is one of the few showing her in sorrow. Yes, this St. John is a copy of the one in Capitoline — but Caravaggio did the copy. 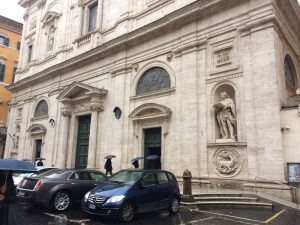 Cross the Pantheon and down Via del Salvatore to Chiesa di San Luigi dei Francesi. This is one of Rome’s best bargains. In the far left corner of the church, three Caravaggios are on display: The Calling of Saint Matthew (1600); The Martyrdom of Saint Matthew (1600); and Saint Matthew and the Angel (1602). The Calling of St. Matthew is considered one of the best illustrations of Caravaggio’s use of light and shadow. It tells the story of a soldier killing the saint on orders of the Ethiopian king. Matthew had rebuked the king because the king lusted after his own niece. If you want to shed more light on the affair, look for a box on the right. It accepts 50 centesimi, 1 euro and 2 euro coins to illuminate the three facing masterpieces.

Chiesa di Sant’Agostino, Via di Sant’Eustachio 19, 7:45 a.m.-noon, 4-8 p.m., free. Three minutes away down Via Dogana Vecchia is Sant’Agostino, built in 1483. That makes it one of Rome’s first churches built during the Renaissance. Inside, usually, is the Madonna del Loreto (1606). This painting caused a public uproar as it shows Mary barefoot and looking very ordinary. However, the painting is currently on loan to Chiesa Santa Domenica in Forno, Italy. It will return at the end of June 2018.

Day One: Side Trip 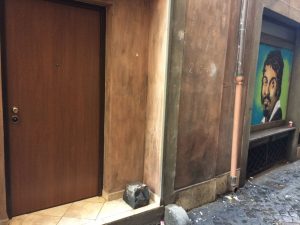 To see part of Caravaggio’s life outside his studio, his old apartment is located on Vicolo del Divino Amore, an eight-minute walk north off Via dei Prefetti. It’s easy to spot on the tiny alley. His large portrait is painted on the wall next to his old door. Then return to Prefetti and take two quick rights onto Via di Pallacorda. About 400 years ago a tennis court stood here. It’s where Caravaggio defeated Ranuccio Tomassoni in 1606. So outraged, Tomassoni attacked Caravaggio who stabbed him 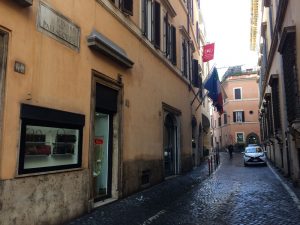 three times and left him for dead. Behind the tennis match was a score to settle, the source of which remains a mystery.

To end the day, go to the Terrazza Barromini atop the Sant’Agnese in Agone on Piazza Navona. Here you can enjoy a romantic drink in the open air with spectacular views of Centro Storico. 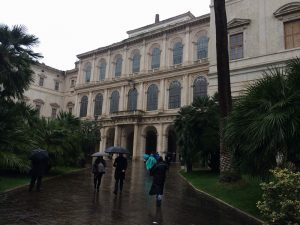 Palazzo Barberini, Via delle Quattro Fontane 13, Tuesday-Sunday 8:30 a.m.-7 p.m., 12 euros. Before starting out, head to one of Rome’s many open-air public markets. Stock up on cheese, prosciutto, fruit, bread, wine and water for a picnic later in the day. Then take the Metro to Barberini and walk five minutes to the palace.

Pope Urban VIII had it built in 1893 to highlight the Barberini family’s rise to papal power. This is home to part of the national gallery. It holds three of Caravaggio’s works: Narcissus (1599), depicting a youth falling in love with his own reflection; Judith Beheading Holofernes (1620), the widow cutting off the head of the Assyrian general in his tent; and St. Francis in Meditation (1606), a popular subject for the church accentuating poverty. 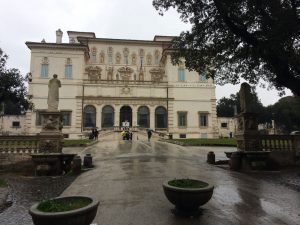 Time it to finish eating with your pre-reserved entry to the museum. Once a neoclassical mansion, in 1997 it opened as a museum housing the Borghese family collection. Here you’ll find the biggest collection of Caravaggios including Young Bacchus (1594), Madonna and Child with St. Anne (1606) and David with the Head of Goliath (1610). Please note the violent theme of his work.

Chiesa di Santa Maria del Popolo 12, Piazza del Popolo daily 7 a.m.-noon, 4-7 p.m., free. It’s a 45-minute walk to Piazza del Popolo. But much of it is through beautiful Villa Borghese. You’ll eventually come down a hill. You’ll also walk through the same huge gate that victorious Roman armies passed under on their return to the city. Built in 1477, the church became one of the first churches visitors saw in Rome. Before entering the church, check out the facing wall. You’ll find a plaque noting the last beheading by the Catholic Church ,which took place in the piazza in 1825.

The church has two paintings, both were first rejected for reasons never confirmed. The Conversion of St. Paul  (1601) shows Saul of Tarsus as he’s blinded by light on his way to Damascus to kill all the Christians in the city. In The Crucifixion of St. Peter (1601), see how Peter is crucified upside down. He did not want to imitate his god. 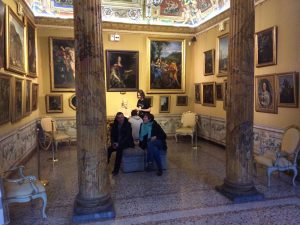 Galleria Corsini, Via della Lungara 10, Wednesday-Monday 8:30 a.m.-7 p.m., 12 euros. This is another 45-minute walk.  You could take the No. 23 bus from Leone IV to Lungotevere Farnesina and walk four minutes. But it’s a lovely jaunt along the Tiber River into Trastevere. The gallery is in the late Baroque palace built for the Corsini family in 1740. The last Caravaggio of the tour is St. John the Baptist (1606). It’s a rare shot of the young saint looking disheveled as if he just woke up. It’s located in the fifth room of the museum packed frame to frame with paintings. 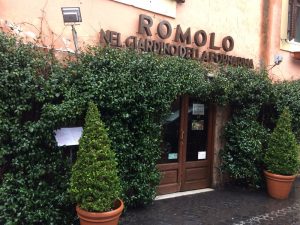 End your tour just down the street with dinner at Romolo nel Giardino della Fornarina. This wonderful restaurant is located at Via di Porta Settimiana 8. And it’s in a lovely building where Raffaello fell in love with Fornarina. Today you dine in a beautiful enclosed patio on Roman cuisine with elegant twists.

Vatican Museums, Viale Vaticano, daily 9 a.m., 6 p.m., last Sunday of month 9 a.m.-2 p.m., 17 euros without online booking, 21 euros with Skip the Line online booking, free last Sunday of month, http://mv.vatican.va. It’s a 40-minute walk across the river to the Vatican. You CAN take the Metro from Flaminio outside the piazza gates to Cipro and walk 12 minutes. However, you’d miss the great shopping up Via Cola di Rienzo.

The Vatican Museums have arguably the world’s greatest art collection spread over 13 ½ acres. It has one Caravaggio: Deposition from the Cross (1604), universally admired and copied by the likes of Rubens and Cezanne. It’s located in the Pinacoteca museum, the overshadowed papal picture gallery. And of course, aside from the Caravaggio, the Museums hold a full day’s worth of other art. That’s plenty enough to keep you well occupied. Enjoy! 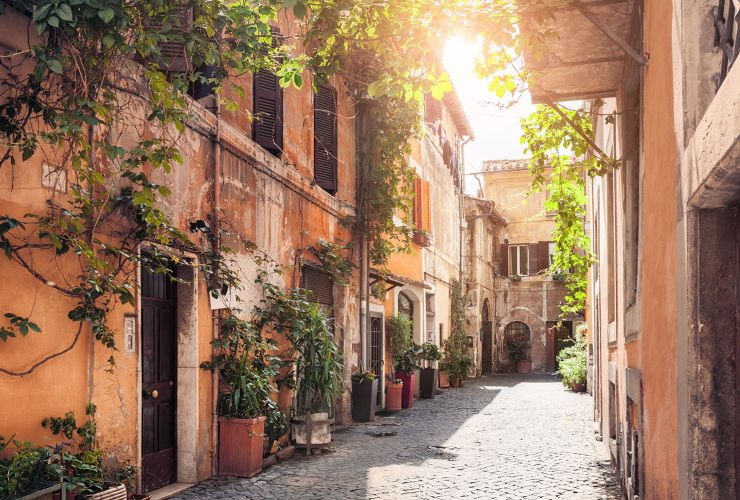 Passeggiata 101: A Walk Through Rome’s Trastevere

The neighborhood of Rome’s Trastevere sits on the west bank of the Tiber River. A series of bridges connect it with Centro Storico, the historical center of mankind’s most powerful civilization. In these last 2,000 years, Trastevere (from the term “attraverso il Tevere” or […]